A Look at Cory Booker, the Social Media Mayor

How are politicians using social media platforms not only to glean votes and support, but to communicate with voters about what it takes to govern?

Earlier this month, Newark, New Jersey’s Mayor Cory Booker’s twitter blog took home the “Shorty Award” in the government category. Booker is no stranger to media attention. Originally elected to Newark City Council in 1998 at age 29, Booker made his presence felt both in Newark and the media immediately. Writing in Esquire magazine in 2008, Scott Raab recalls some of "Booker's Heroics"—his earliest attention-grabbing moments, such as: "pitching a tent to conduct a ten-day fast in 1999 to shame [then Mayor] Sharpe James into providing more police and better city services to his ward,” or his 2000 “move into a battered motor home that Booker drove to the city's darker corners for campouts."

Booker’s ill-fated first mayoral campaign in 2002 was recorded by documentarian Marshall Curry and turned into the Oscar-nominated film Streetfight. After his 2002 loss, Booker ran again in 2006, winning 72% of the vote. Since that first campaign, the charismatic Booker has appeared on The Oprah Winfrey Show, Meet the Press and Real Time with Bill Maher. In 2009, he appeared on The Tonight Show with Conan O'Brien following a battle (started when O’Brien insulted Newark and Booker banned O’Brien from the city) between the mayor and the host over several days, fought on television and YouTube.

Writing for The New York Times the day after Booker's election, Damien Cave noted that Democrats had likened Cory Booker to the junior senator from Illinois, Barack Obama. The next day, Cave quoted Booker describing his leadership philosophy: "It's going to be a very inclusive management style, a style that is based upon holding people accountable." It may well be this same impulse that draws Mayor Booker to social media.

The city over which Mayor Booker presides is home to nearly 280,000 people. Yet as of March 8, 2010 Booker had close to 1.1 million Twitter “followers", plus nearly 20,000 Facebook “fans". These sites, along with his YouTube channel and blog, are certainly platforms he uses to hold people accountable. For example, Booker frequently uses his Twitter and Facebook pages to encourage his constituents (and anyone else interested) to join night patrols. He includes, with these requests, links to a YouTube video which features him interviewing members of the night patrol. He requests each person to state why they decided to participate, then turn to the camera, state their names and say "I'm taking responsibility.") He also uses his Facebook and Twitter pages to provide people with information on meetings, panels, his television appearances, links to his YouTube videos (of which there are 94) and inspirational quotations.

While it may all seem like random noise—quotations and videos, volunteer requests and a plethora of seemingly nonsensical "re-tweets" it's having a measurable effect. As Cory Booker's use of social media tools increase, his coverage in other forms of newer media goes up too.

The proof is in the press

This relationship can be tracked through searches of LexisNexis Academic and Google. In order to compare coverage, I separated Mayor Booker's career into four segments:

I conducted a search of newspaper articles, television and radio transcripts, magazine and blog posts which feature or mention Booker, and then took the total “mentions” Booker received in a given time frame and divided it by the number of days that elapsed over that period to figure out the number of times per day Booker was mentioned in a given medium. (For example the first time segment was 365 days long. Cory Booker was mentioned in New Jersey newspapers 124 times during that time period. 124/365 = .34 or roughly one article every three days.)

Booker’s mentions per day throughout these periods are as follows: 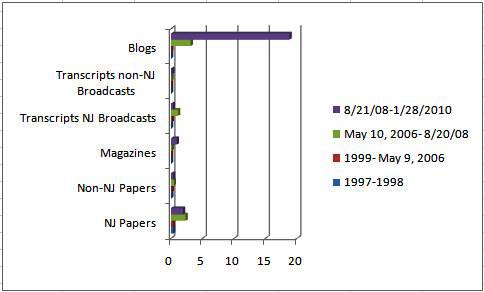 While it is clear that Mayor Booker's use of social media is helping to build some momentum for him and his city, what may not be so clear at first is what he is doing correctly. In fact, it is likely that a casual visitor to his Facebook or Twitter page may think that Mayor Booker is just throwing stuff up on his profiles with no rhyme or reason. This is could not be further from the truth. Not only does Mayor Booker use social media in an effective and well thought out manner, he has gone to lengths to research and learn what makes social media communication effective.

In May 2009, Mayor Booker hosted a meeting with executives from every major social media site (including, but not limited to Facebook, Google, LinkedIn, Ustream, Twitter and Ning). At the meeting, each executive was given the opportunity to detail for Mayor Booker how their platforms could be made most useful to him and his communications department. Following each person's synopsis of their own site, Mayor Booker engaged the group in a brainstorming session. Attendee Loic Le Meur, CEO of Seesmic, remarked on his personal blog, after the meeting, that both Booker and his communications staff "get" social media and how to use it effectively.

On the Personal Democracy Forum blog, Anna Curran suggests that part of Booker's effectiveness and ability to engage others on social media is his “authenticity and humor”.

Joe Mescher writes on his blog Social Media Commando that Mayor Booker's success comes from using social media as a means for "two-way discussion" as opposed to just another way to get out a message. He specifically refers to Booker's comedic tiff with Conan O'Brien. Following O'Brien's initial joke about Newark, Booker viewed the opportunity as one to respond with an amusing web video, not, as Mescher points out, "...as a PR opportunity to state how shocked — Shocked! — [he was] to be the target of such unfair criticism..." In doing so, Booker was able to engage with O'Brien for a television/YouTube back-and-forth that lasted a week and resulted in a $100,000 donation to Newark. (Additionally, these exchanges and his appearance on the late night show garnered a lot of web traffic as well as news mentions.)

Aside from how comfortable a politician and his or her staff are with social media platforms, a successful new media strategy rests on a number of factors. Mashable's Josh Sternberg wrote about four key ways local politicians can use social media effectively, "creating a conversation" was the first way mentioned, followed by "[as] part of a broader strategy," "bringing about change" and "the most important part is people". Booker's social media plan certainly covers all four components.

While Mayor Booker does use social media as a way to facilitate and engage in conversation, it is clear that it’s not the only part of the Booker team's communication strategy. Sending press releases almost daily, Mayor Booker's communications team has not given up traditional forms of media in favor of newer forms. Judging by the types of posts Mayor Booker makes on his social media platforms, it's clear that they have taken the tactic of using new media to get people to engage in old civic engagement strategies. (In other words, he is using Facebook to ask people to volunteer— a political tradition far older than social media.) By posting invitations/suggestions to participate in events with Mayor Booker around Newark, not only does he spread the word about the event, but addresses constituents’ concerns. He reveals, to those who follow him on the web, that he is aware of the problems facing his city and he is making efforts to address and thus change them.

Sternberg's comment "the most important part is people" seems to fit not just Mayor Booker's desire to attract residents of Newark to his events but also his inclinations to share inspirational quotes and “re-tweet”. Mayor Booker realizes that there are literally hundreds of thousands of people reading what he says on a daily basis and they likely give his page or profile a quick scroll before moving on to something else, so his information has to captivate them, if even for a few seconds. He is able to captivate them by mixing up his types of posts—not just events or quotations—but also links, videos, pictures and stories.

While “getting it” and implementing a multi-faceted communications strategy help Mayor Booker and his team saturate the internet with information, these factors do not wholly account for why his messages stick. The effectiveness of Booker’s messaging has to do with both the needs of his audience and the needs of other media makers.

In an article called “Local Politicians Use Social Media to Connect with Voters” on PBS’ MediaShift blog Steven Davy makes note of some of factors contributing to an environment in which local politicians’ use of social media is more likely to succeed. One factor he mentions is the decline of local journalism. In the case of Mayor Booker, one of the largest papers in New Jersey, The Star Ledger is based in his city. However, the paper focuses on most of northern New Jersey, not exclusively on Newark, thus while there is some coverage of political and social issues specific to Newark, it is limited. Booker wisely uses his social media to fill some of this void. People in Newark who want information about their city, and see Mayor Booker as an authority, are likely to seek out the information he provides online.

Davy also notes “a cultural shift in the media landscape.” Social media outlets, for example, are no longer just used by teenagers and twenty-somethings. Instead, some Facebook users proudly display pictures of their grandchildren and banter about their 25th or 50th high school reunions. Where in the past, politicians using social media may have been speaking to people not yet old enough to vote, the audience now is far more diverse and representative. This change in users’ demographics has brought a change in content needs. No longer does the social media audience just want fluff—celebrity gossip or sports scores—the older and more educated audience is looking for substantive information.

Using social media also allows politicians to control the pacing of a story. Where in the past an elected official may have been at the mercy of the local news outlets – sending press releases and waiting for a story to get picked up – politicians can now create the news themselves. If a local news affiliates will not pick up a story, elected officials can now create the story him or herself – by making videos, posting a blog, or using Facebook and Twitter to promote both the videos and/or blog—all of which Booker does. It’s this kind of rapid-fire information, available at the click of a mouse, that the web audience has come to expect.

Booker’s use of social media is slowly making him into a multimedia celebrity. As he becomes more popular on the platforms he controls (more Twitter followers and Facebook fans) his popularity on external media increases. He has at his disposal a trusting audience that is hungry for information (which he is willing to give them) and overworked journalists scouring the internet for new stories and angles. Other local politicians could likely replicate some of Mayor Booker’s success not just by familiarizing themselves with the platforms, but also with the needs of their audience and area journalists